Good morning! (afternoon or evening, depending on what time you’re reading this). Jamie McLean here. As I’m sure you’re already familiar with the other members of The Loft’s design team, I thought I’d quickly introduce myself. Here’s what you need to know. I’m 23 years old, my favourite colour is red and I’m a dog person. Now that we’ve got the awkward formalities out the road we can begin. This is my introductory blog post on city branding and over the next few weeks I’ll be looking into some of the more successful examples of city branding, and the interesting ways in which cities are exploring their brands. Brace yourself.

People Make Glasgow. A phrase that has been extremely important to Glasgow over the last couple of months. In particular, during the XX Commonwealth Games. Now, the stadiums may have emptied,  and the glorious summer we’ve had is drawing to a close, but we are only beginning to reap the benefits of Glasgow’s re-brand. You’ve most likely came into contact with various incarnations of the brand in your day to day life, whether that’s in the form of a hot pink badge pinned to the lapel of a serious looking businessman, or perhaps you’ve been left slightly dazed as a bright pink blur whooshes past you in the form of one of the many ‘People Make Glasgow’ bikes? Regardless, you’ve most likely, at some point, seen the behemoth ‘People Makes Glasgow’ vinyl sticker that plasters the side of the City of Glasgow College building towering over George Square. With Scottish pride at an all time high, the people of Glasgow couldn’t be happier to let you know the self-admiration they feel for their home town. I mean, I’m from Stirling and even I feel slightly privileged to be living here. 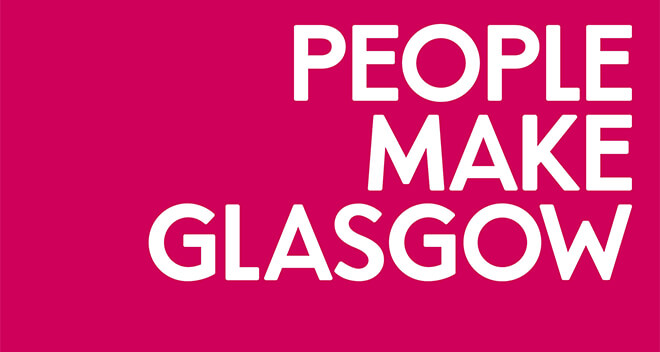 For me the brand exploded quickly into popularity with a variety of campaigns, one of which I’ll go into briefly for you now (you’re welcome). Perhaps one of my favourite campaigns over the last few weeks has been ‘Nextbike’. Just ahead of the Commonwealth Games Glasgow launched Scotland’s first major cycle hire scheme. Awesome, right? I think so. By downloading the companion app people are able to see the locations of all the bikes near them, as well as how many bikes are at certain docks. Plus all the bikes will be carrying the eye-catching ‘People Make Glasgow’ branding for the first year so you’ll be extremely hard to miss. Plus you’ll look all heathy and eco-friendly cutting about on one of these bad boys. Once again, you’re welcome.

The promotion of ‘People Make Glasgow’ has definitely been one of strong points of the brand. The interaction between the ‘people’ and the brand is what makes it great. A notable example of this is how George Square was renovated during the games, and no, I’m not talking about the big Greggs refurbishment… 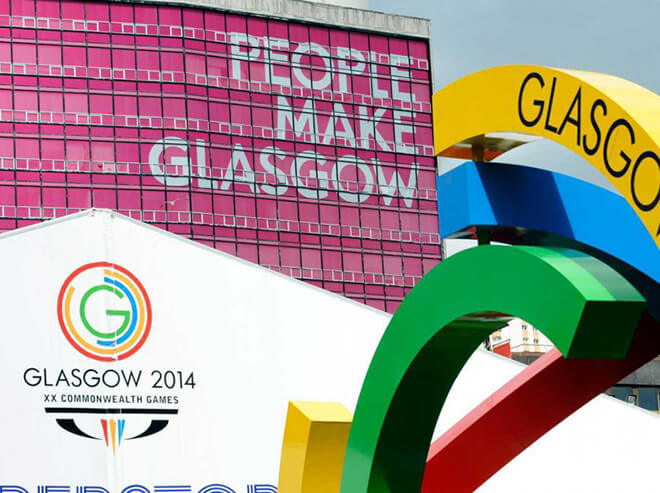 During the games, George Square became the cultural hub of the city. With a Commonwealth superstore providing tourists and native weegie’s alike with all their commonwealth needs, a ticket collection centre for the games and a glorious view of the COGC building proudly displaying the ‘People Makes Glasgow’ slogan in plain sight. However, if you happen to miss the gargantuan pink obelisk you should probably spend less time on your phone… 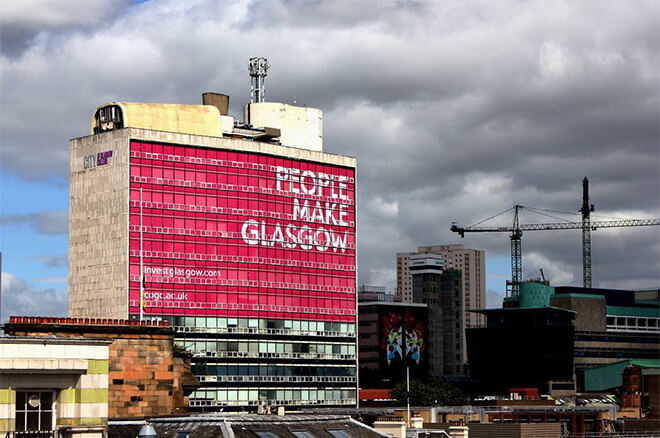 Another attraction I found hard to miss was the Glasgow 2014 ‘G’ as I’ve come to call it (open to debate). The statue generates massive impact visually, not just in scale but colour as well, it certainly captures your attention. The statue quickly gathered a lot of interest from the people of Glasgow and was a massive hit with the tourists (I’m sure you seen the queue to get a photograph taken with it…). This gave people the chance to interact with the brand itself by taking photographs with the ‘G’ and it also gave people the opportunity to upload their photos to be seen on screen. The signature ‘People Make Glasgow’ circled the base of the statue and it’s surrounded with a beautiful floral arrangement, a lovely sight on a hot summer’s day. It’s there for the foreseeable future as far as I’m aware, so if you haven’t already it’s defiantly worth a look. 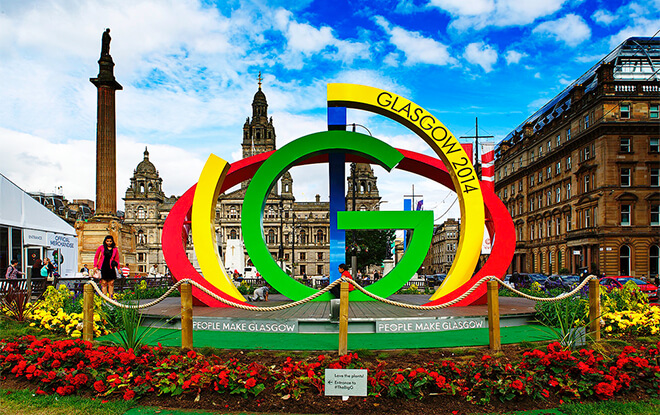 The key objective of a brand is to project a company’s values onto a desired set of consumers. However, Glasgow has a slightly broader audience in mind. Glasgow wants to project itself to the world, and it doesn’t care who knows it! All things having been said and with all eyes on Glasgow, one thing is for certain; the next Commonwealth host has a lot to live up to.

Well, that’s all he wrote on that one (me). Look forward to further blog posts in the future as I delve deeper into the world of city branding. I was hoping that my first blog post wasn’t going to be so focused around the colour pink… It really messes with the bad boy persona I was going for, oh well. Peace. 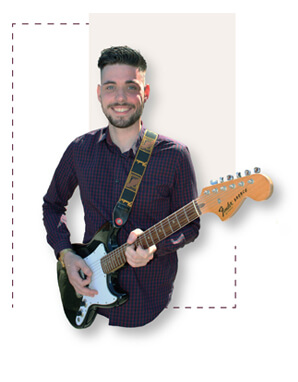