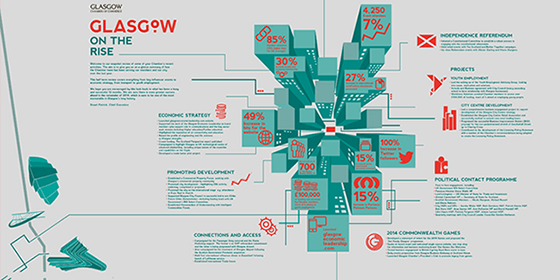 ‘Glasgow Chambers of Commerce, city on the rise’

The Glasgow Chambers of Commerce asked us to create an infographic that would provide an ‘at-a-glance summary’ of how the Chamber had been serving the people of the city over the year of 2014 and to shout about its successes. The new infographic would form the centre-piece of the significant August edition for the ‘Glasgow Business’ magazine. An edition published during the heights of The Glasgow Commonwealth Games and The Scottish Referendum. We decided to create a visually striking piece of work that truly caught the eye of the reader, enticing people to read about the vast accomplishments of The Glasgow Chambers of Commerce and the city itself.
We created a graphic made up of skyscraper buildings, alongside a heading of ‘Glasgow on the Rise’ to portray the growth of Glasgow as a city and the Glasgow Chambers of Commerce itself. Key statistics such as 4,250 people attending Chambers events, a 30% increase in mid-size company memberships and a 15% increase in ‘Premium Partners’ were highlighted in the design of the infographic.

“It was a real pleasure to work with the team at the loft. They understood the brief instantly and we are able to execute the infographic perfectly. It’s resulted in a really impactful piece of creative which forms a centre fold to our bi-monthly magazine and has been very well received by our readership.”