Whilst looking at the whisky market, with exception to a select few, it’s became apparent that world whiskies tend to be more progressive with their packaging. That’s why in this week’s edition of ‘The Water of Life’ we’re journeying to the ‘Land of the Rising Sun’ and looking closer at Japan’s Karuizawa 1960. 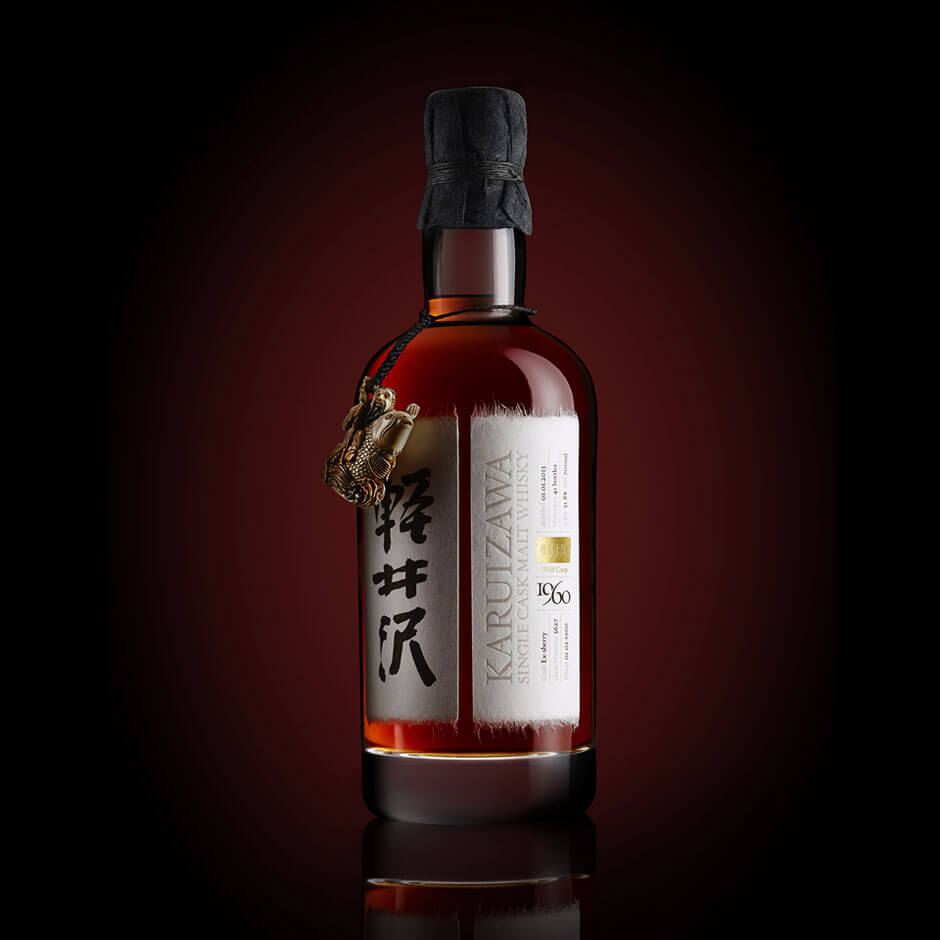 Karuizawa was founded in 1955 as a traditional Japanese distillery using imported Scottish ingredients. When Karuizawa – Japan’s smallest distillery – closed in 2000 its stock of 364 casks was sold to the Number One Drinks Co. In 2006, they began to release single cask bottlings which not only won awards but also a cult following for Karuizawa. So when a single cask laid down in 1960 was discovered, interest from the whisky world was electric. Cask No. 5627 yielded a precious 41 bottles of the oldest and rarest Japanese whisky in the world.

At £12,500 per bottle, (that’s right, the price of a fully kitted Fiat 500,) the packaging solution was required to embody the spirit of the malt for market with the respect, authenticity and individuality that would befit a spirit of such remarkable character and quality.

Following closely to the heritage of this rare spirit, creative articulation pays homage to the language, art and culture of East and West. The reason why there are two labels is to reflect the two cultures that have come together to create the whisky. This story is reflected in the production methods for both bottle and box, where the skills of craftsmen from both Japan and the UK have been blended to create a solution truly unique within the industry. Each bottle and box has been brought to life, testament to considered layers of Eastern and Western artistry. 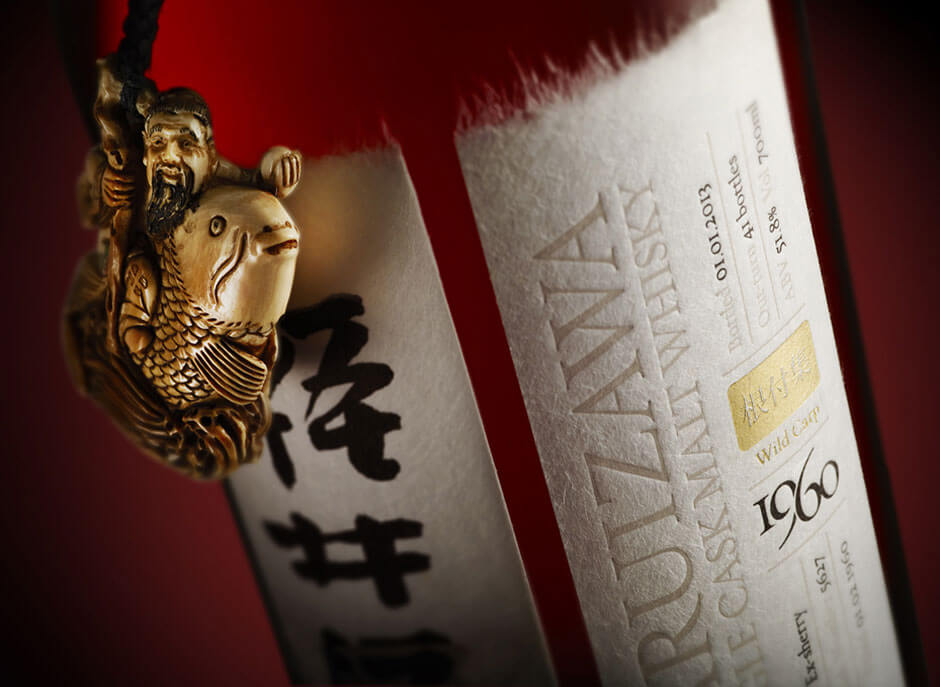 Starting with the fusion of cultures on the bottle labels — the washi paper used was handmade in Japan by Norito Hasegawa — a third generation papermaker, leaving a deckled edge to highlight the composition of the material and an authentic finish.

The Japanese calligraphy on the left is the work of award-winning calligrapher Soji Nishimoto, drafted in to create every label personally. On the right, an effective contrast of print techniques — a letterpress studio from Glasgow has complimented the hand calligraphy with subtle, tactile print finishes. Starting with the embossing for the distillery’s name and finishing with a subtle flourish of hot-foil gold to highlight each specific bottle’s ‘Netsuke.’ 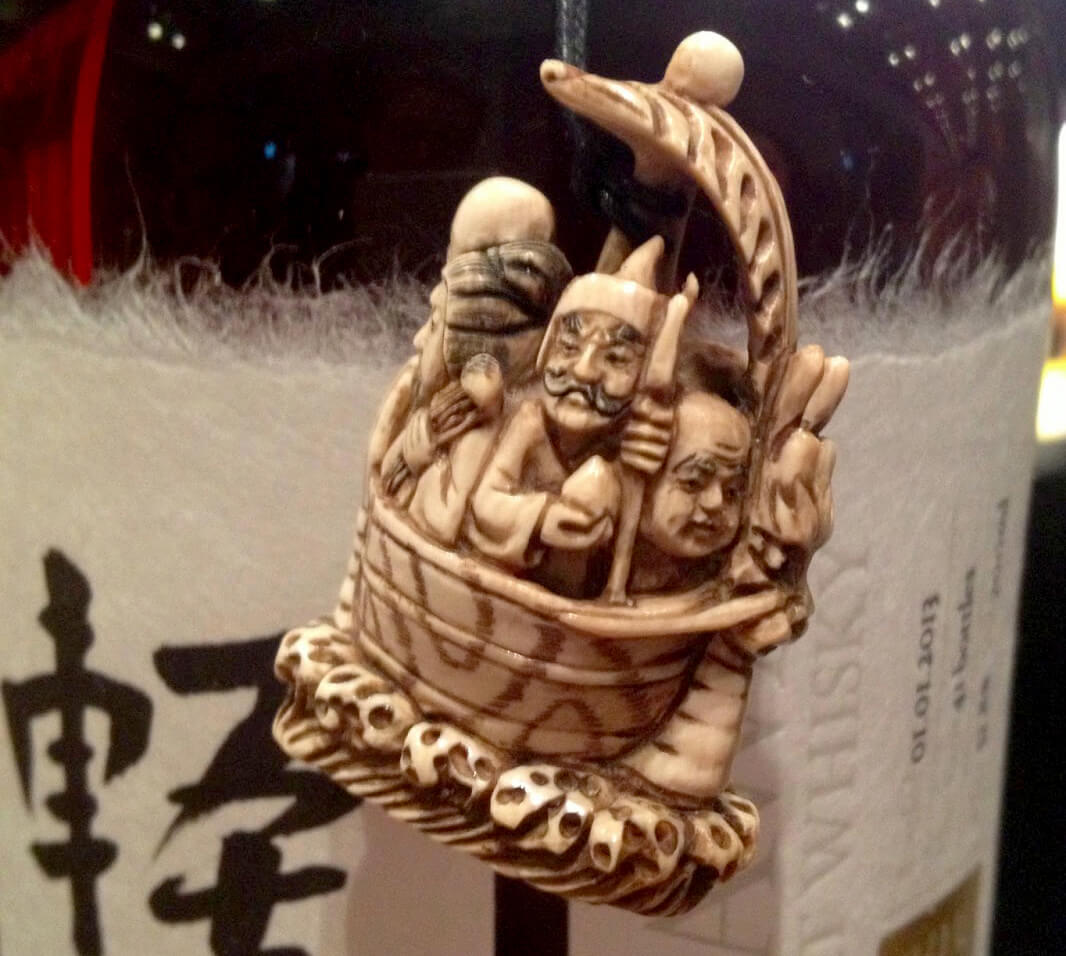 What is a ‘Netsuke?’ I hear you ask. Don’t worry, I needed to do a bit of digging myself to find out exactly.

A Netsuke is a miniature sculpture, invented in 17th century Japan which evolved over time into expressions of extraordinary craftsmanship and great artistic merit. As there were only 41 bottles yielded from Cask 5627, the obvious (and boring) choice would’ve been to number them 1-41, but in careful consideration to the whisky’s story, each bottle was decorated with — and named after — its own unique netsuke sourced and selected from a specialist London dealer. This simple consideration to the ‘trivial’ aspect of distinguishing each bottle became a unique selling point for the whisky’s character.

Putting the traditional cherry on the top — the bottle was finished off with a dip in hot, black wax to seal in the cork then wrapped in traditional Japanese cloth

What would be worthy in housing such a rare and fantastic bottle? …a traditional Japanese puzzle box, of coarse. 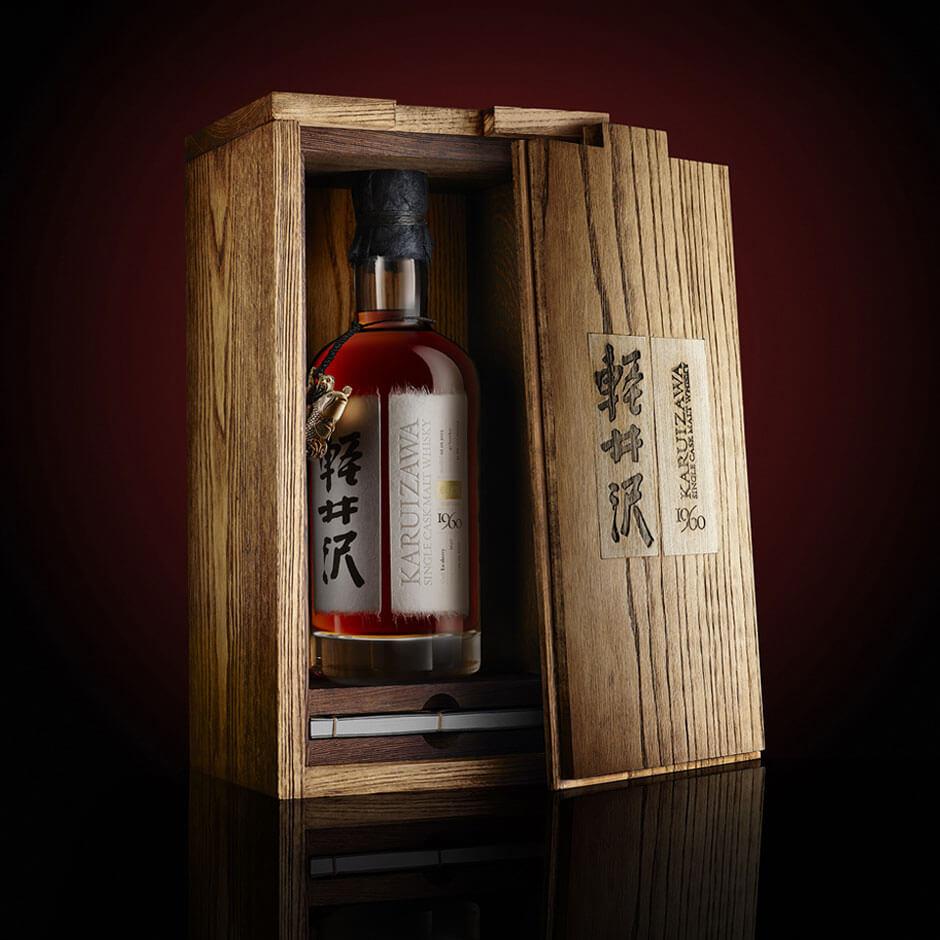 The box was modelled on traditional Japanese puzzle boxes but handmade in England, again fusing east and west. The exterior of the box is made in a lighter wood, the interior in a darker wood: to mirror the cask. Ash for the outer box, because of the detail in the grain – and for the inner box — Wenge, which is naturally dark and gives the impression of a flamed cask. The most special aspect of the box, for me, is that the front of the box is inlaid with actual pieces of the cask  head — which held the whisky in it’s maturation. Another interesting print technique utilised was the hot metal branding used for the Karuizawa kanji, and English translation. 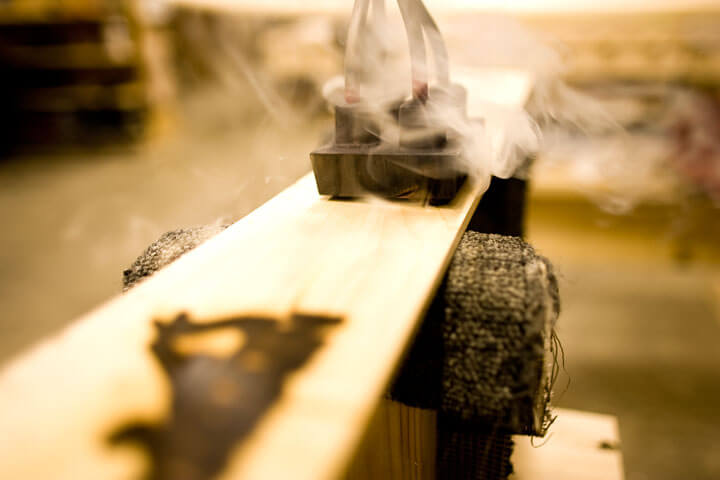 When it comes to whisky, the packaging finishes (as we’ve been discussing) are extremely important and no more so than when you’re dealing with a malt of such opulence. It would be the accepted norm to just throw the full gamut of expensive finishes at the bottle and call it a day, but what we have here in Karuizawa is an extremely rare and special whisky, framed in an exceptionally considered and successful fashion, only serving to further the whisky’s own unique and special story.

The result of an exceptionally considered packaging solution? …All 41 bottles were sold in advance. 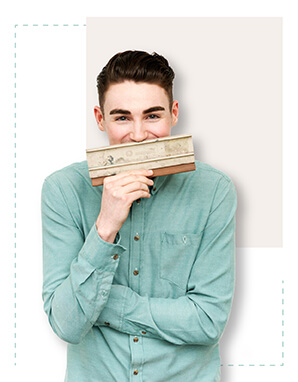 A lover of all things print, Eamon brings so much knowledge and creativity to the loft as a designer. He’s at his happiest when sketching away with his favoured 2H pencil and flicking through some paper samples. Not short of a hobby or two, he’s a keen traveller and boasts a full screen printing set-up in his bedroom.