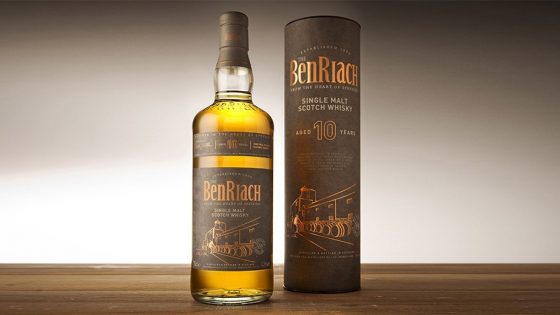 Speyside whisky distiller BenRiach re-launched as an independent distiller in 2004 and were looking to establish a new creative direction for their ’10 Year Old Single Malt.’ A very important project and one they trusted the loft with. The design was to be bold, premium and should signal a change of direction in-line with the company’s 10th anniversary. The loft team explored a number of different design themes, directions and concepts looking to bring the distillery to life on the packaging. Concepts created included experimentations with the barrels, the floor malting, and views from both inside and outside the distillery. Development focussed on the distillery itself where we played with a range of compositions, angles, and illustration styles. The team explored a number of paper and print finishes, eventually settling on a textured gunmetal grey with gold foil finish for real ‘on-the-shelf’ impact. The new BenRiach 10-Year-Old, Single Malt Whisky is the first of a series of BenRiach whiskies featuring the revised design direction. The project also represented a unique moment in the loft’s history as the company’s first labelling project. We were delighted with the final results as were BenRiach.

“The BenRiach 10-Years-Old is a key launch for us, as it marks a significant milestone; it is the first core range expression to be created predominantly from whiskies distilled at BenRiach since we took over in 2004. For this reason, we were looking for a striking new packaging design to reflect this important moment in the distillery’s history. We are delighted with the final result.”