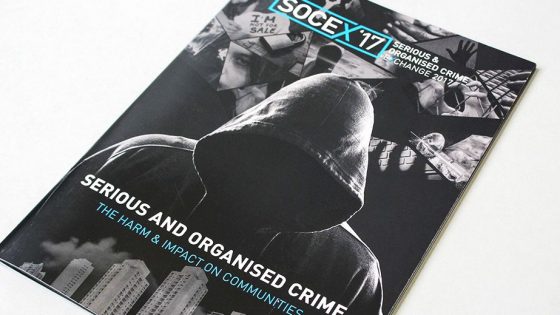 ‘SOCEX 2017, a brochure that lives on, long after the main event’

We were given the opportunity to work with the organisers of the Serious and Organised Crime Exchange (SOCEX) for the third year in a row for the design of their 2017 brochure. The organisers asked us to be extremely bold in bringing the main themes of the conference to life, ‘Harm and Impact On Communities,’ whilst continuing to build on the secondary themes of the conference. The loft team made widespread use of a hooded figure throughout the brochure to reflect the effect crime has on communities. This menacing figure makes an appearance in various guises throughout the brochure and was particularly helpful to the event organisers as it avoided the risk of stereotyping race or gender in the communications of the conference. The front cover received careful attention with the hooded figure looking over a council estate in a scene reminiscent of Dali’s painting ‘The crucifixion.’ The background of the front cover included images which reflected many of the conference’s secondary themes including ‘slavery’ and ‘governance and coercion in communities, etc.’ We carried through the ‘network’ visual identity from previous conferences into the 2017 brochure. This was complemented with vivid page backdrops – each of which brings the different sub-themes of the conference to life. The brochure was incredibly well – received by both the client and also the delegates of the conference.

“SOCEX, Serious and Organised Crime Exchange. As a concept, the Conference title can spring up many images – whether coming from the dark world of blockbuster thrillers or gritty police dramas on TV. The loft managed to capture the seriousness of the subject matter being discussed across the two day conference while providing a document which will have a life long after the conference itself, capturing the core elements of the event in such a way that attendees and their colleagues will return to it as a vivid reminder of what took place.”