For the best part of a decade, the loft has been delighted to work with Speyside whisky distiller BenRiach. The collaboration began with the design of the transformative BenRiach 10Year – launched to celebrate a decade of the organisation under new ownership back in 2014. Such was its success, we were given the opportunity to build on this with a series of new expressions – the incredibly bold ‘Cask Strength,’ the innovative ‘Quarter Cask’ and the creatively ambitious ‘Triple Distilled.’ 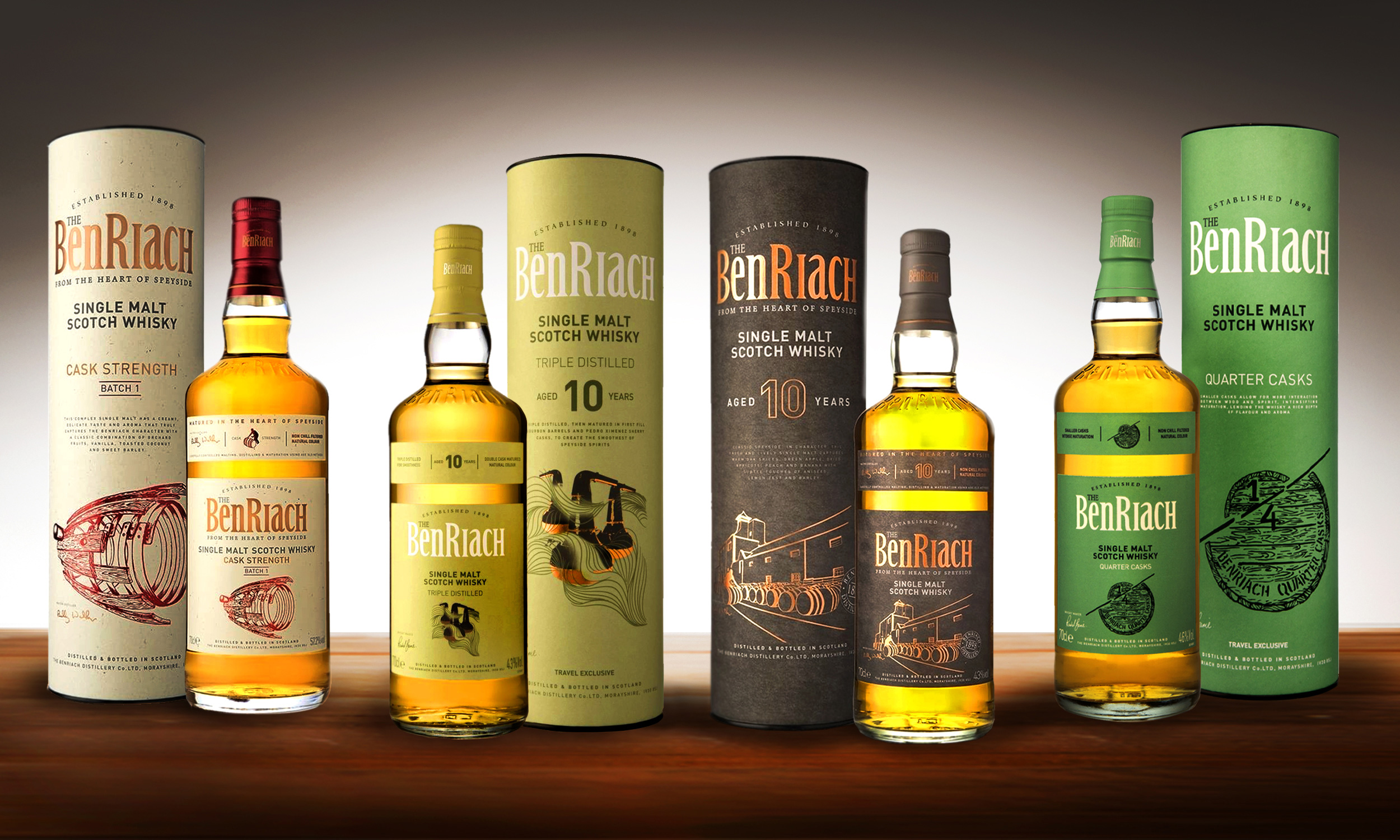 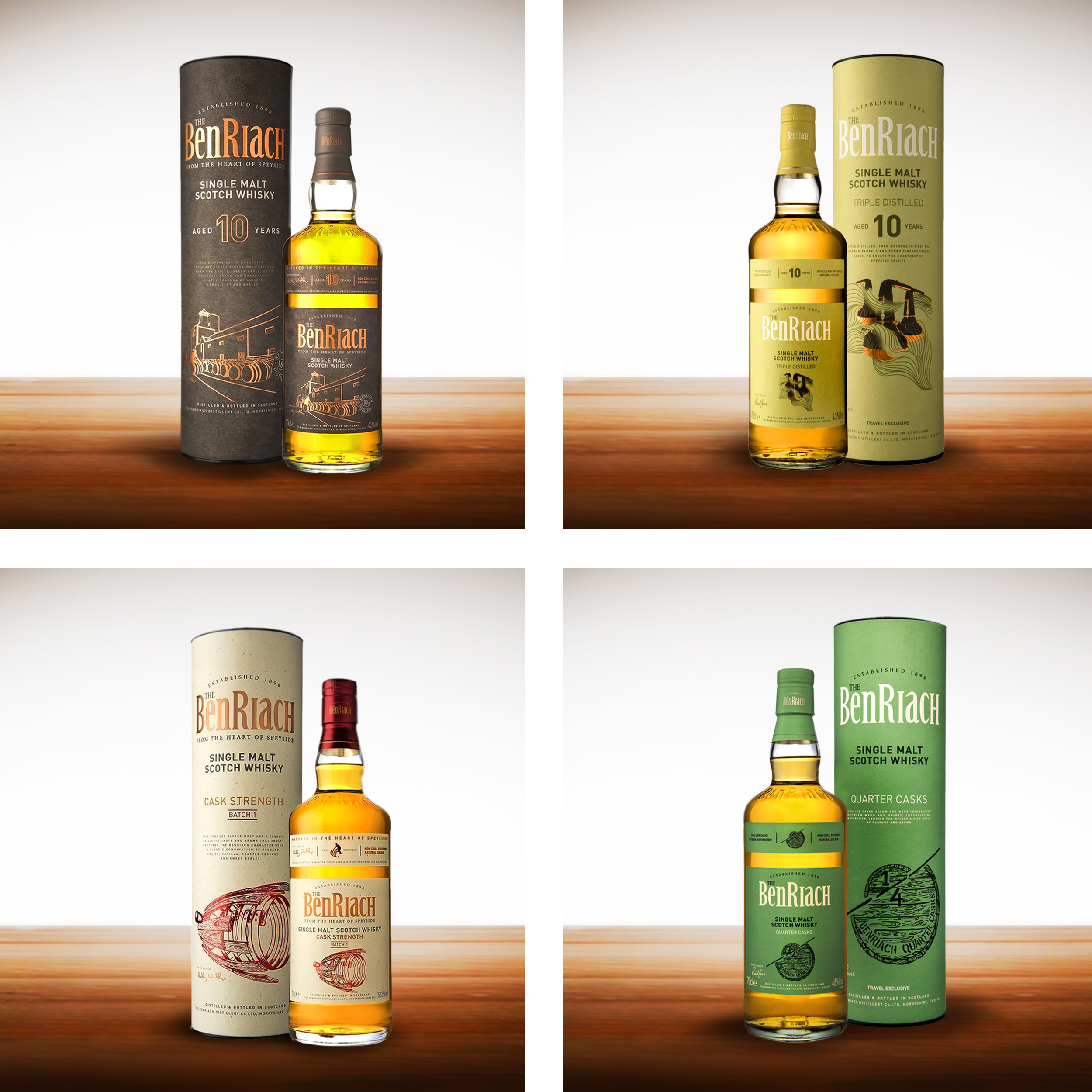 From top left to bottom right – The BenRiach 10-Year, was designed to celebrate the tenth anniversary of BenRiach under new ownership whilst bringing the range completely up to date. We made a decision to  showcase the distillery in a modern and minimal way using gun-metal grey paper with a bronze foil. The Triple Distilled clearly showcases the three stills where the whisky is distilled and is illustrated using a stunning combination of inks, foils and paper-pressing too – a masterclass in print production. The bold Cask Strength showcases an exploding cask being blown apart by the strength of the liquor inside. And finally the Quarter Cask neatly uses a stylised cask as a fraction to showcase the smaller cask. 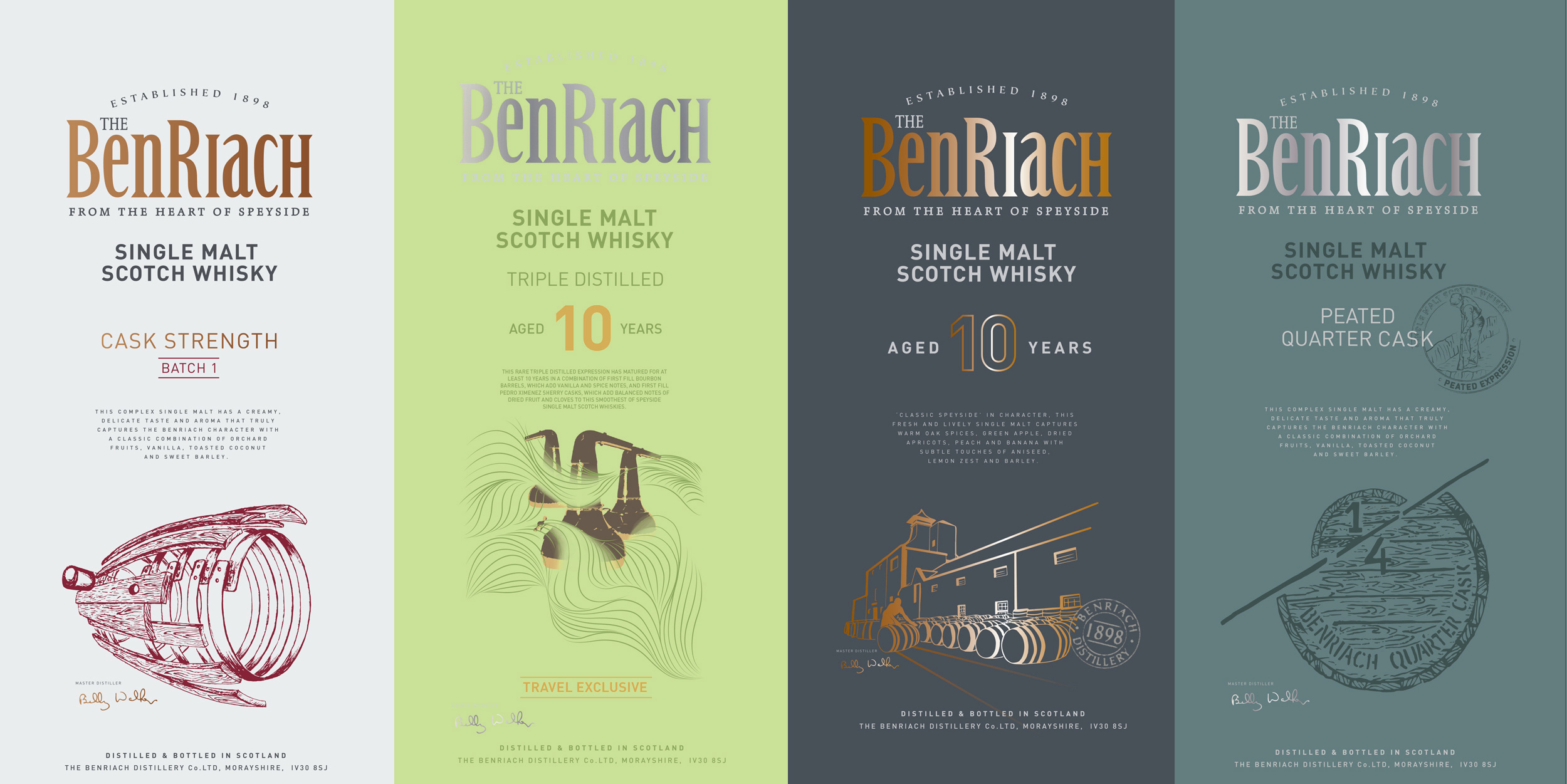 Each design pushing the boundaries of bold, hand-crafted, yet innovative design. 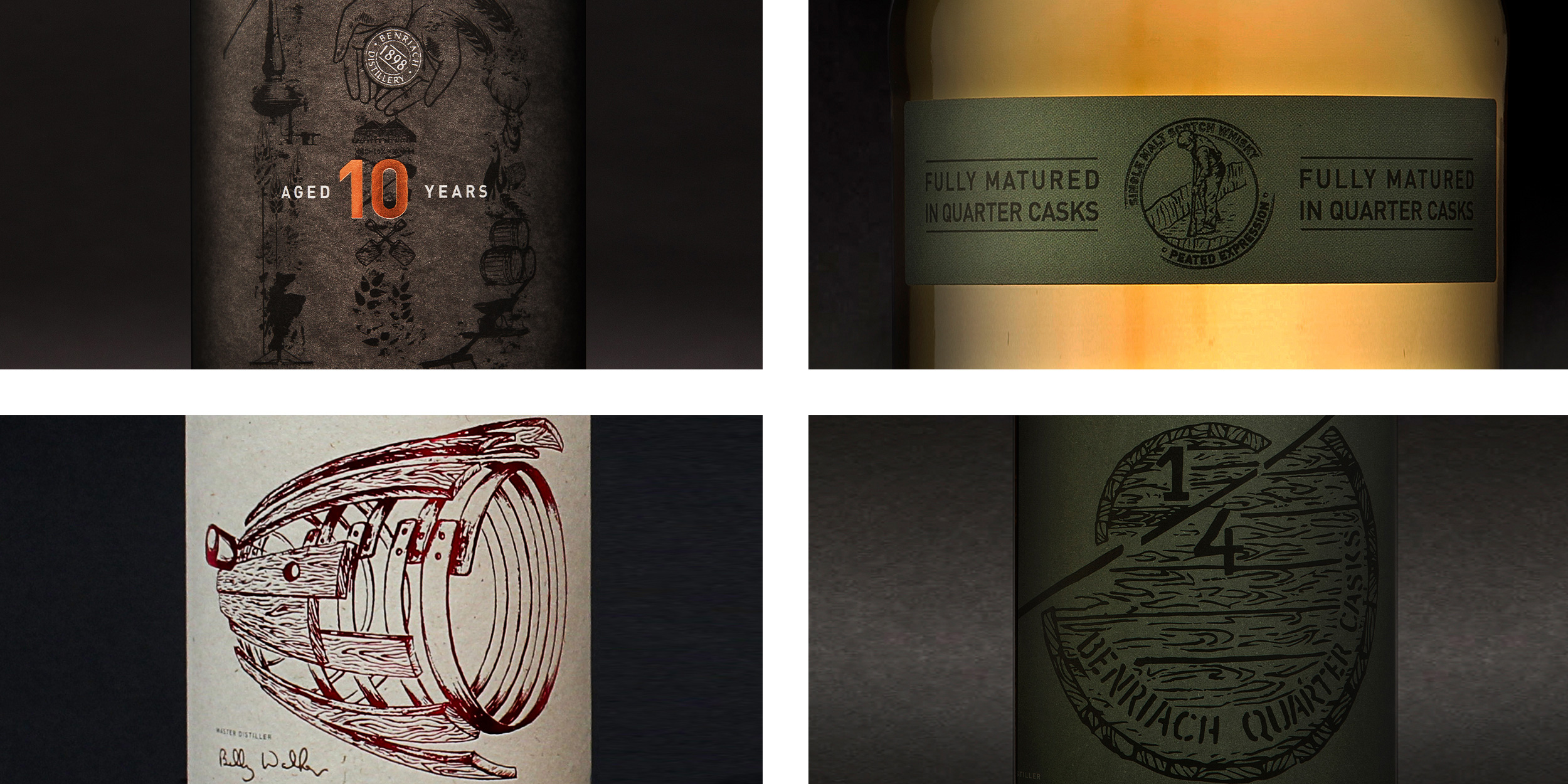 Some of the detailing work of various expressions – a foiled age statement against the backdrop of ’10’ created with key illustrations of Speyside, an official stamp for peated expressions, the exploding cask foiled and pressed for the Cask Strength and a similar effect used for the illustration of The Quarter Cask. 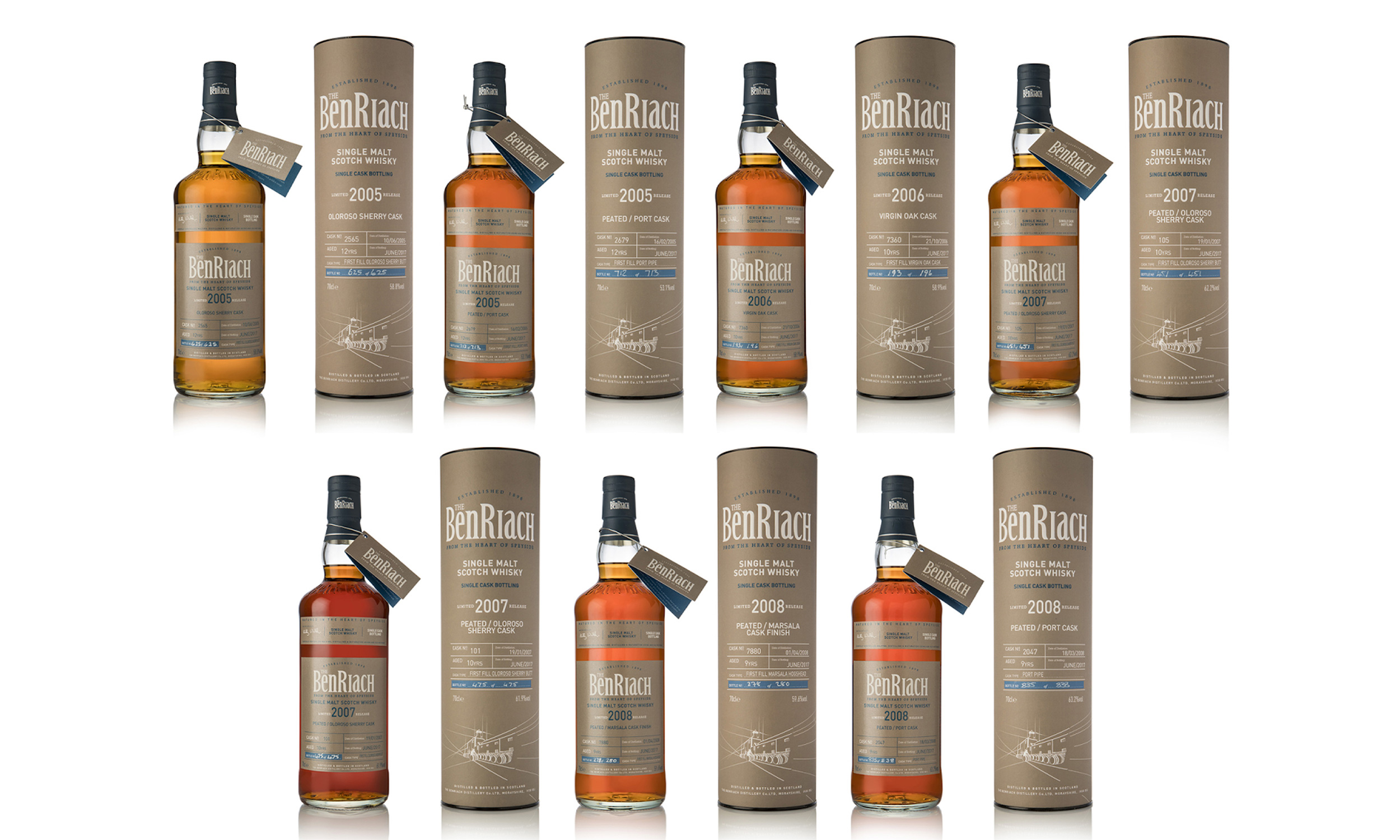 The BenRiach Cask Strength was an additional expression created alongside the release of the BenRiach 10-Year. 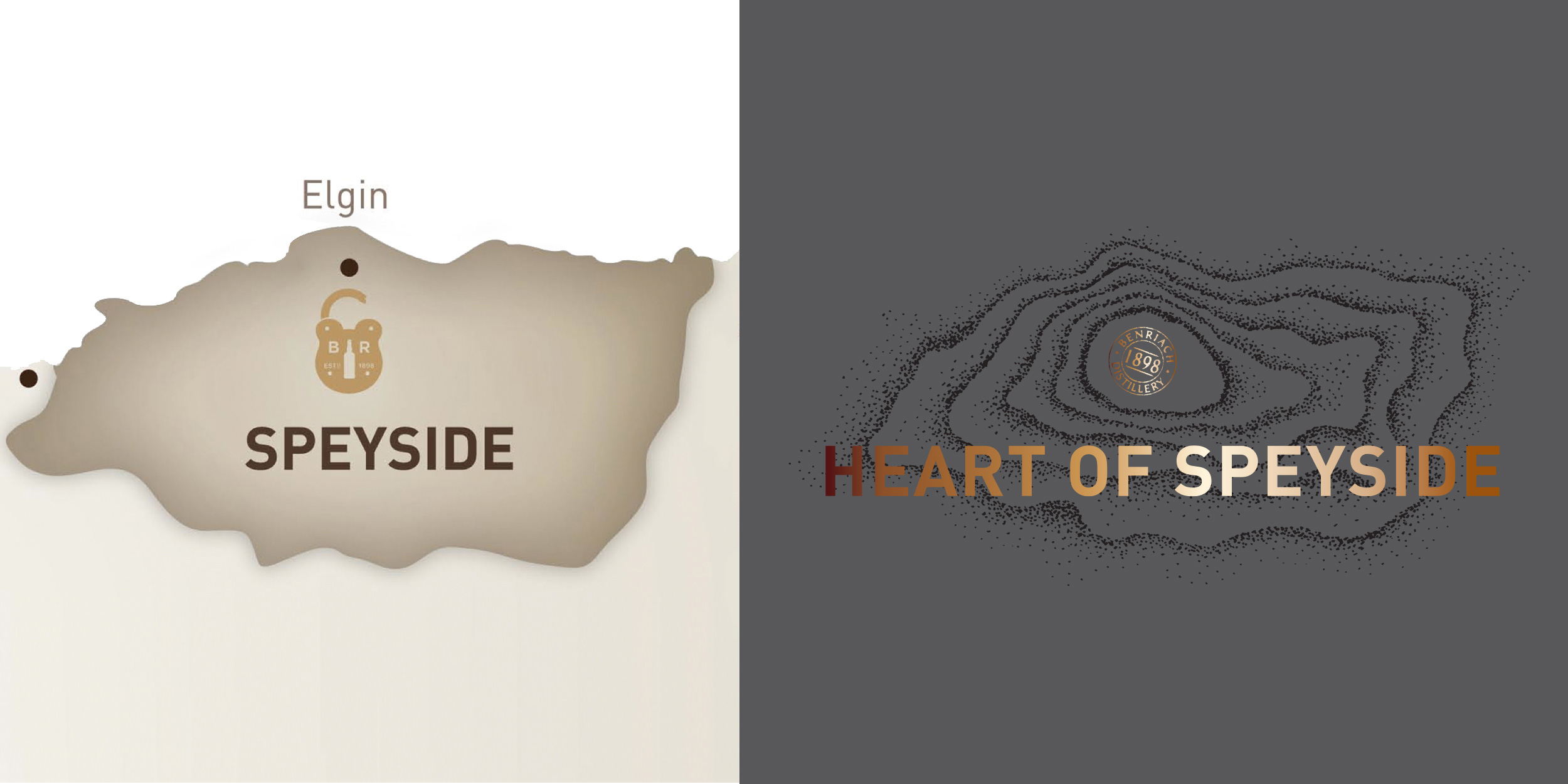 Our partnership with BenRiach resulted in many outstanding creative ideas – the idea above showing the topographical lines of the region being re-interpreted in a unique way with pen dots and some bronze foiling for the letters. 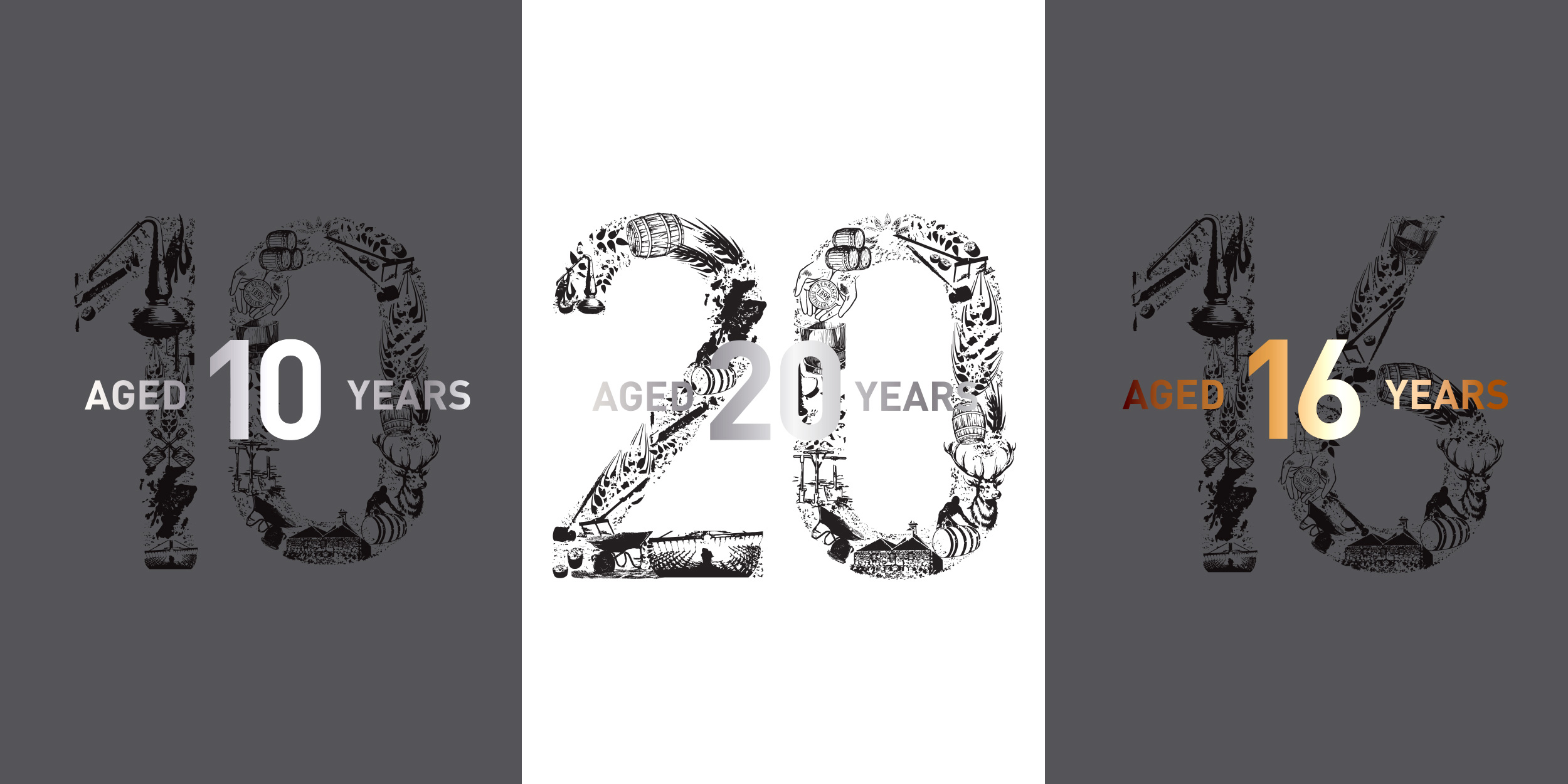 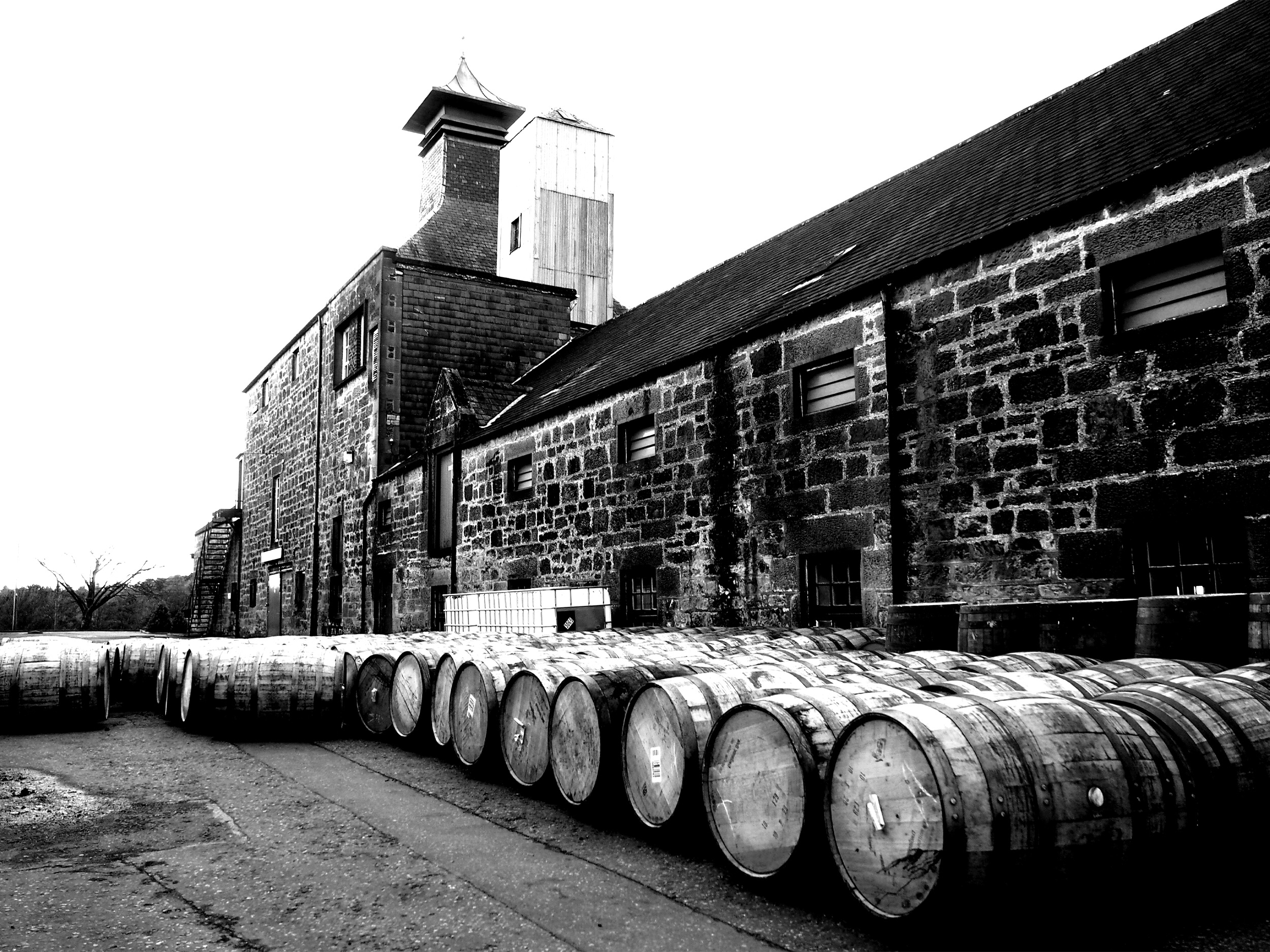 The Speyside distillery, abound with inspiration. 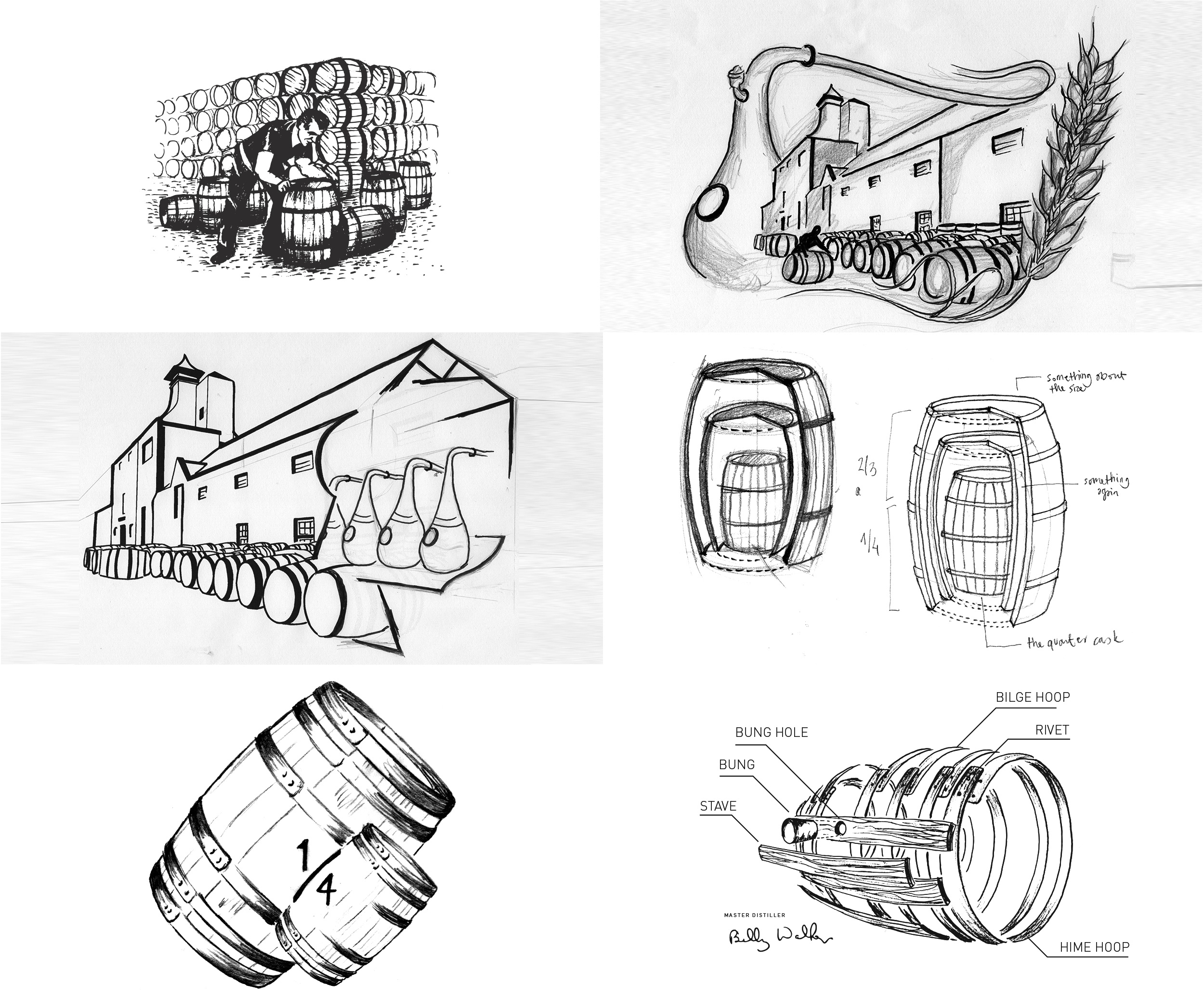 A series of random sketches from our studio showcasing the work on many different expressions – everything from the original BenRiach-10 Year to the Cask Strength to the Quarter Cask, etc. Sketching remains at the heart of the loft’s design process. 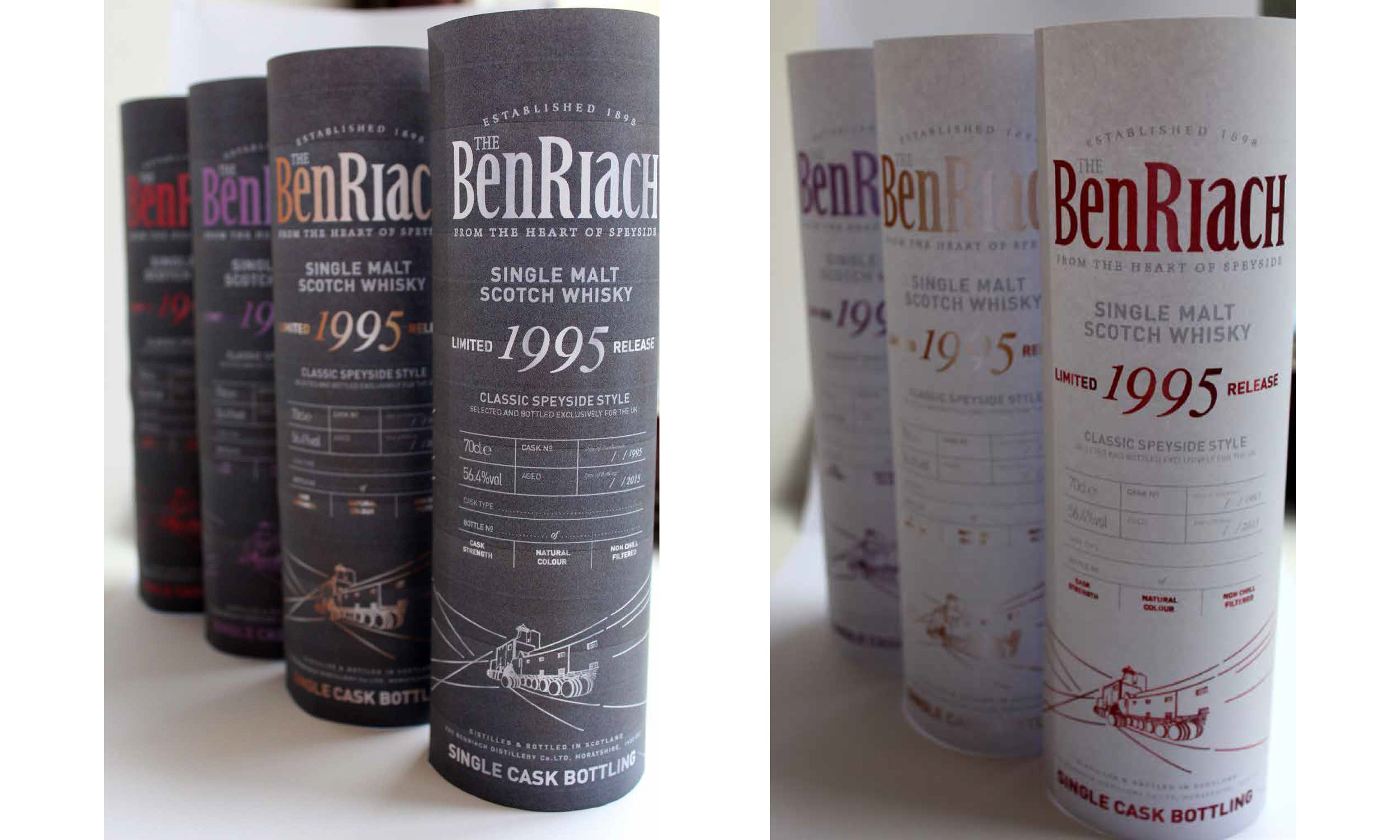 Our team also introduced a product-design style, rapid prototyping approach to the creative process using paper and card to test creative packaging ideas much more quickly. You can see some of the mini mock-ups above. 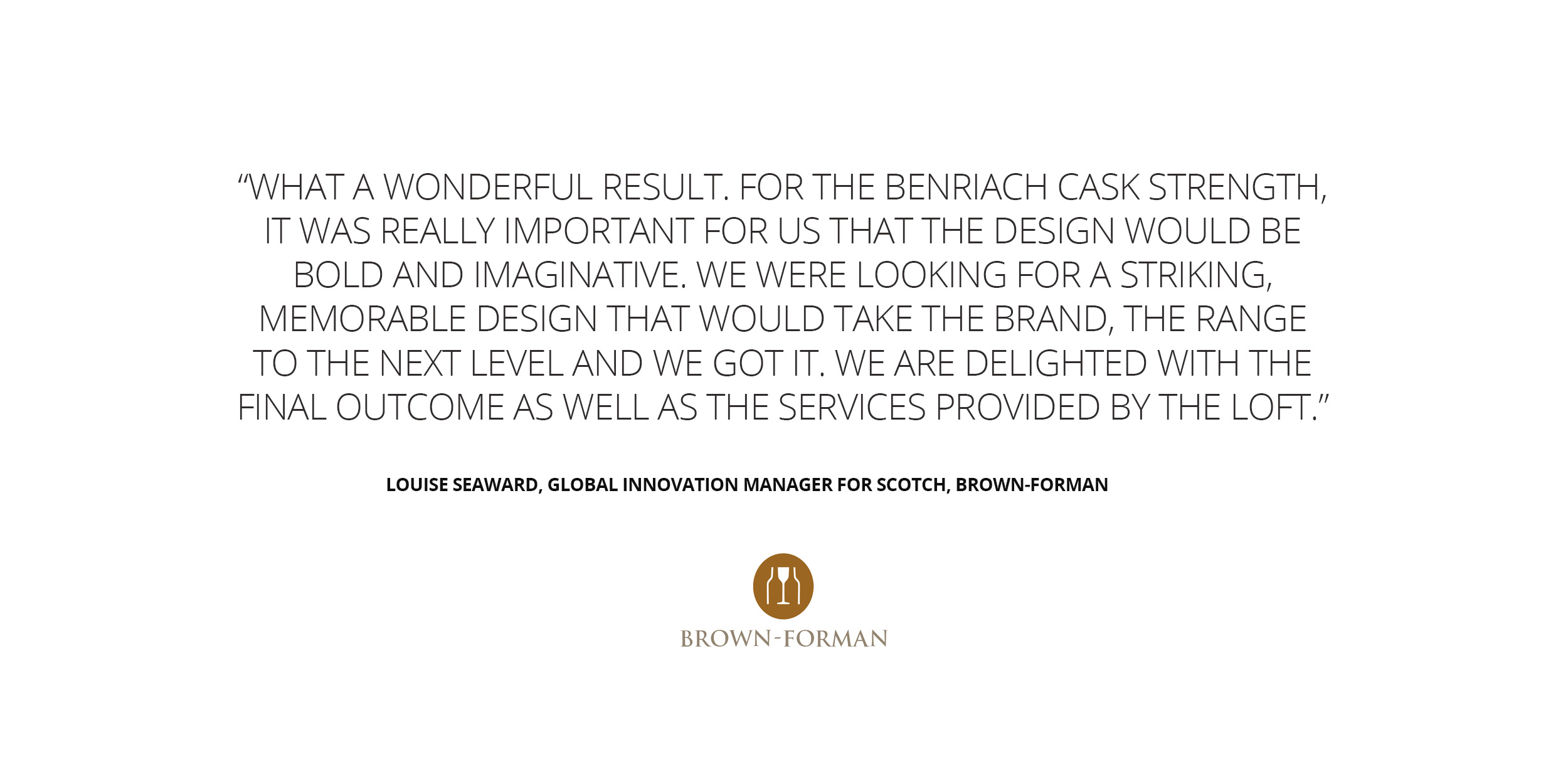 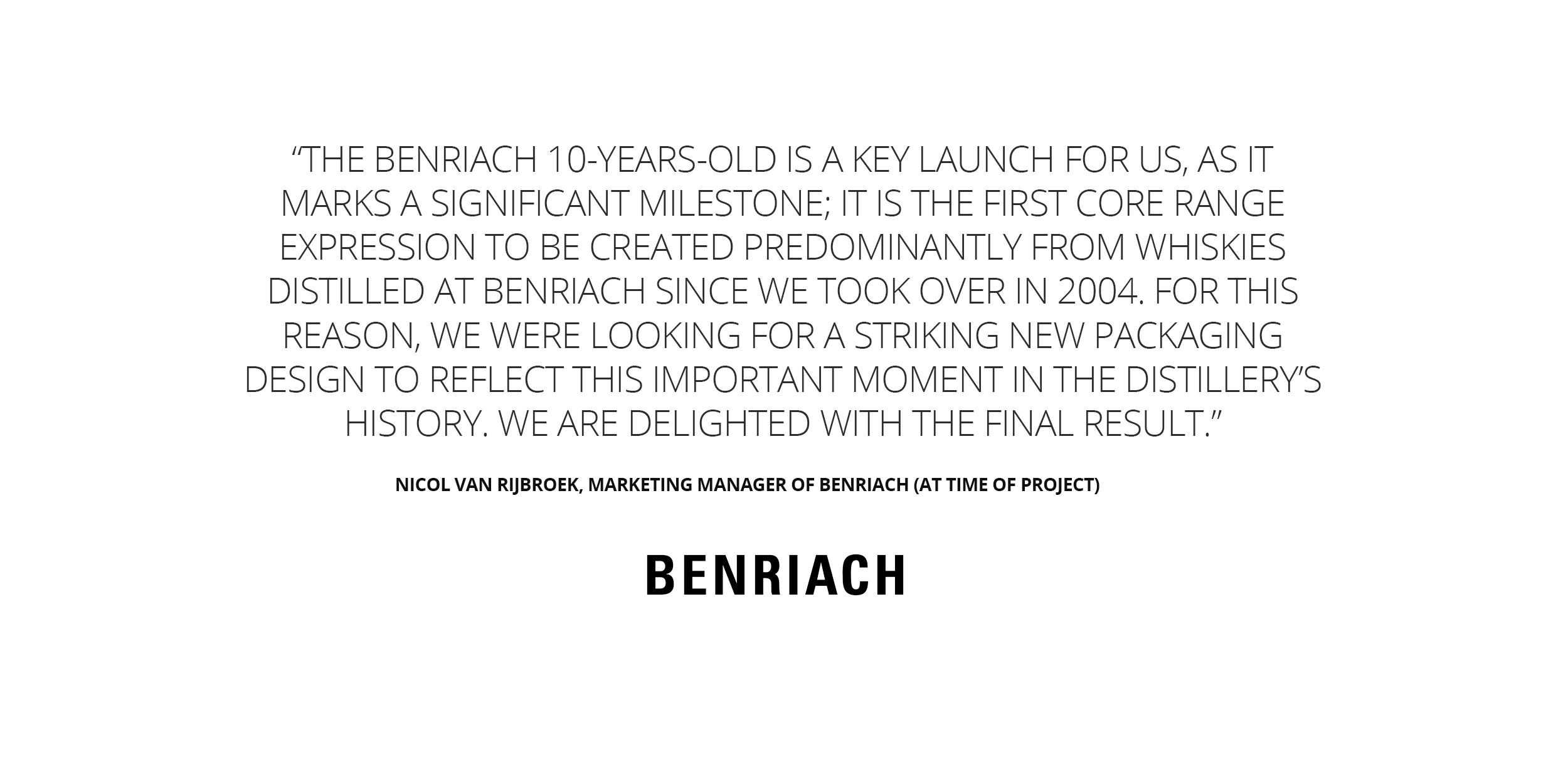 Some very kind testimonials from the teams at BenRiach and Brown Forman.